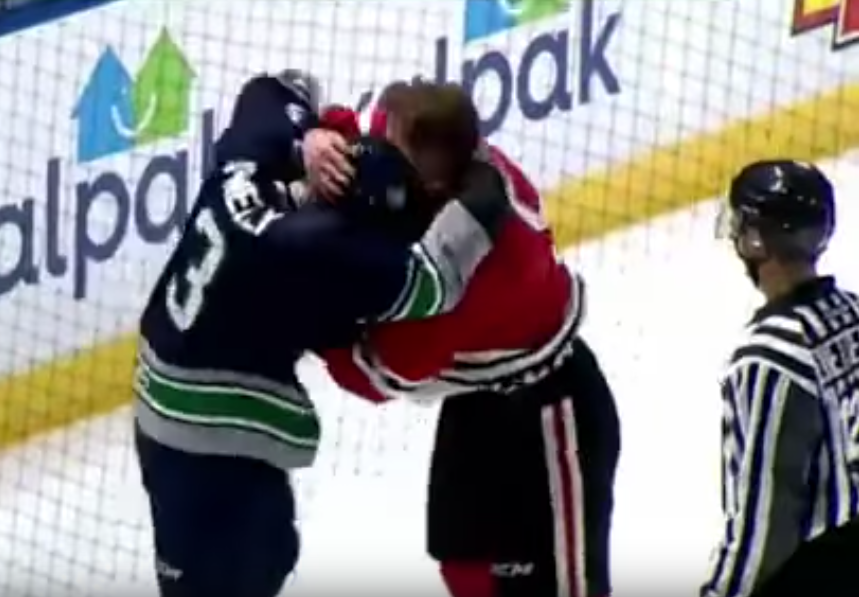 Somebody needs to update Cade McNelly’s Eliteprospects.com profile.  It has the young Westlock, Alberta native listed at 5’11 and 141 pounds.  There are more than a few people around the WHL finding out that the 16-year-old is much bigger than that.  The WHL website has him listed at 6’2, 178.  Several weeks into the 2017-2018 WHL season has seen McNelly featured in only 7 of the Thunderbirds’ 12 contests.  All the same, he’s made a noteworthy impact.

It was in an October 7th matchup against the Portland Winterhawks, that McNelly first made a name for himself.  With about 13 minutes left in the third period of a blowout game (Portland was up 9-3) Portland forward, Ryan Hughes was carrying the puck up ice.  As Hughes crosses the red line and heads toward the blue line, McNally lines up his check.  He delivers a high, bone crunching, open ice hit that sends Hughes tumbling into the boards and down to the ice.  18-year-old, WHL Veteran Matthew Quigley comes over to challenge the (at the time) 15-year-old McNelly.  McNelly doesn’t waste anytime.  Before the camera can pan over to show the action, McNelly is throwing punches like a seasoned veteran middleweight brawler.  The fight has both players throwing absolute haymakers before the linesmen step in to break it up.

On October 10th in a contest against the Vancouver Giants, McNelly lined up a massive hit on Giants’ forward Cyle McNabb.  The hit, against the boards, dropped McNabb to the ice and sent his stick sliding away.  The puck disrupted a center attempt causing a puck battle behind the goal line, allowing Seattle to regroup.  This was short-lived however as Vancouver player, Austin King-Cunningham took issue with McNelly and confronted him.  In a spirited bout the (at the time) 15-year-old McNelly handled himself well against the 17-year-old King-Cunningham.

Do not mistake this as glorification of the violence in hockey.  In these exchanges, Cade McNelly shows a few things.  He demonstrates a capability to deliver clean, well-timed, open ice hits to separate a player from the puck, and disrupt an oncoming rush.  He shows a willingness to answer the bell for himself when he is challenged by opposing players for the big hit he has just delivered.  These qualities are still important in the game today.  Cade McNelly is not just a young future goon in the WHL, he has the potential to grow into a real physical presence on the ice.